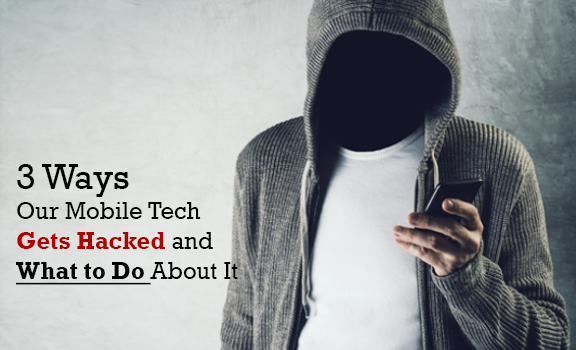 According to a CNBC interview with a senior security researcher at Kaspersky Lab, mobile phones are expected to be a growing battleground for hackers. Whereas major breaches at Target and Sony Pictures involved a compromise to the companies’ computer networks, today’s hackers are increasingly looking at smartphones as easy targets and the headlines are grim. Unfortunately, it’s relatively easy to gain access to everything from credit cards to passwords via your smartphone.

Regularly update your system software, stay on top of the latest malware and hacking news and keep a safeguard on your devices. But to cut off hackers from the source, you should educate yourself on how your mobile tech gets hacked in the first place.

Once you join free WiFi at a hotel or airport, you’re opening the door to potential malware. Hackers can create ghost versions of WiFi signals, a procedure known as spoofing, to make you think you’re joining a safe network. For example, you may see a WiFi signal with your hotel’s name, but in reality it may just be a fake account designed to steal your information. Once you’re connected to a spoofed WiFi signal, hackers have access to everything on your phone from text messages to email.

Unfortunately, hackers can simply create strong WiFi signals and just wait for devices to connect. You aren’t even aware it’s happened. Keep your device safe by adjusting the settings on your smartphone to keep it from automatically connecting. Only use your own network or ensure you’re connecting to a secure, closed and password protected site.

We often hear about unsecured WiFi networks as an entry point to hacking, but charging stations can also open the door to malicious activity. Unfortunately, free charging stations are becoming increasingly popular, seen everywhere from airports to eateries and malls. Plugging into an unknown charging port can directly connect your phone to malware. Instead, charge up at home or bring a portable battery while traveling to keep your devices safe.

Downloading innocent looking apps is one of the most common ways hackers gain control of your smartphone. Only download apps from your phone’s app store, which will verify the authenticity of their products. Regardless of where you download the app from, don’t allow it to access your personal information or social media accounts. Many people do this believing the promise that their information will remain safe.

Remember, leaving your phone vulnerable and lying around on a restaurant table, or even in a busy office, is leaving it open for malware and malicious apps. Use a passcode for your smartphone, or invest in a phone with a fingerprint sensor like the Samsung Galaxy S7 edge for a boost of protection.

Edward Snowden rose from obscurity when he dropped the bomb that the NSA regularly intercepted email and phone communications, among other practices. In 2015, the UK-based online newspaper The Independent reported on his warnings of Smurf Suite. This malware can not only power on and off your phone, but turn on your microphone and listen to what you’re saying and hide the fact it has control of your phone.

Stay alert to any subtle changes in your smartphone’s activity, whether a dip in operating speed or trouble performing tasks. Use an app like Lookout to scan your device for malware and viruses and cut hackers off before they can inflict damage.