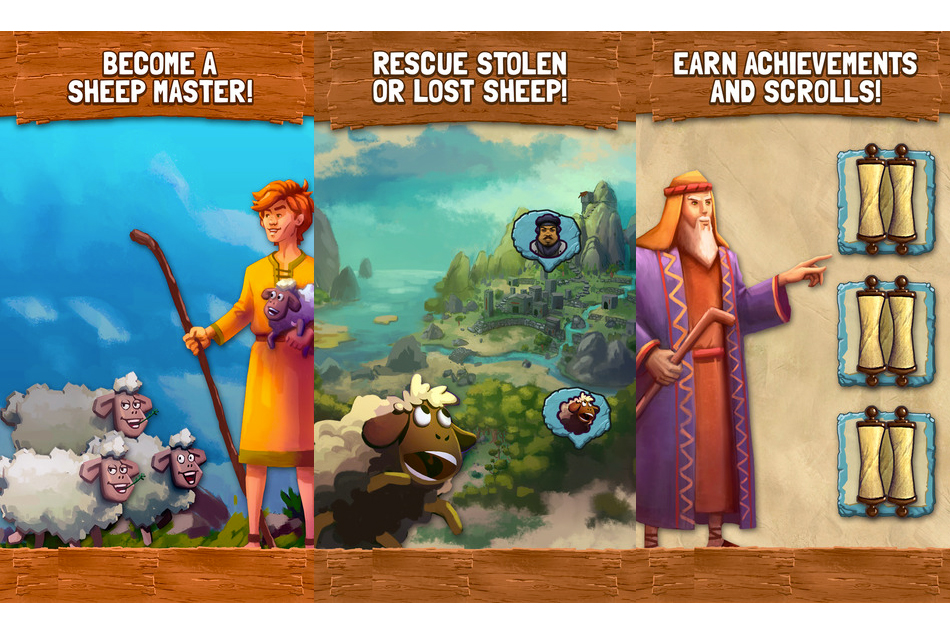 Sheep Master is a strategy game developed by Sunland Entertainment Studios promoting Christian Values of being a good shepherd. The game gives the player an experience of raising a sheep farm and all the problems associated with it.
The game starts with a basic tutorial in the form of instructions from the Shepherd’d father making him:

a) Collect Resources such as cutting wood & collecting food & stone.b) Build buildings such as milking den, sheep fold, tent & vault.c) fight off wolfs which come to attack the sheep.

The game uses the below two types of currencies:

Collecting Drachma & resources such as wood & stone give the shepherd to improve his farm by building many milking dens, sheep fold, tent & vault etc.

The player can upgrade to the next levels by protecting the sheep from wolves which will reward the shepherd with scrolls which can be used to exchange for talents.

The shepherd is given an unique feature where he can whistle to make all the sheep within a given small range to come towards him. This needs to be used to herd the sheeps which are in different locations back to the sheep fold.

Other features in the game allow the shepherd to buy the nearby lands and expand the farm area giving more space for sheep folds to be created which will automatically increase the no of sheeps with us.

Other responsibilities of the shepherd over the course of the game is to:

a) Heal the hurt sheep.b) Protect your farm & sheep from thieves.c) Build reinforcements to your farm.d) Hire & train people to help you in managing the farm.e) Buy animals such as dogs to protect your heep from wolves.

a) The game has decent graphics & natural ambient sound.b) Nice gameplay involving strategy on how to grow the farm.c) Has a Christian background which can be used to build character among children.d) New concept of whistling to collect all the sheep to your position.

a) Game has in game purchase content for the Talents which is required to speedup the building constructions.b) Again graphics is only decent, there are many other farm related games with lower storage requirements with better graphics.c) Game is little slow in terms of the Shepherds movements and it does not seem natural unlike other games.e) Menus little confusing.

Even though the game has some cons, it i still an engaging game which can be played at a stretch. Would have been better if the developers had concentrated a little more on the movements of the characters. The game is available for both the Apple Itunes & Android Playstore.