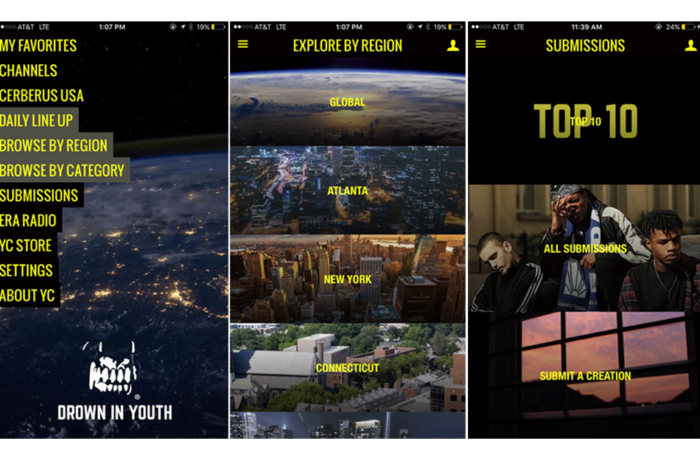 The creators of YUGENCREATIONS set out to bridge the gap between culture and entertainment through an all encompassing app. But did the succeed in their mission? Lets’ break it down and see if they where able to manage such task.

Community:The community section is the place for the users to post on various topics, or “channels” as they app calls them, ranging from streetwear, music, art, to freelance. The amount of channel topics allows for a nice diversity and for anyone to find something that may be interested in, a big pro. However, due to the lack of current users there is a lack of post. Each channel only has a few post and a dozen or so views

Shop Yugen:The shop section links you to either YC Web-Store or to CERBERUS USA. Although, it is nice to have such options it is less impressive when YC’s website is unavailable leaving CERBERUS USA as your only option. However, CERBERUS USA has a limited selection of merchandise; the store only offers a few items of clothing at the moment. Overall, this section is clearly in its infancy and still needs major work to function as a one stop shop (pun intended).

Submit:The app allows users to submit their own creative content to be published which is rare in an app as YUGENCREATIONS. Creators can submit songs, photos, videos. clothing, or artwork.

Daily Line Up:This is clearly the the most developed section in the entire app. Daily Line Up has over a dozen “articles” on various performances by musicians and entertainment news. Biggest complaint, no original content! Most “articles” were either a youtube video or a soundcloud clip, which is nice every know and then when one does not want to read. There where only three short articles that had original content or where a review or a product (JAY Z new 4:44 album and some Air Jordan shoes).

The app itself seems to have potential to compete along with other entertainment websites/app. It has a simple layout, split into regions (curated content for each), easy to navigate, and decent content. However, it has a long way to go before it can compete. The app developers need to continue to improve on the overall aesthetic, fully develop the other regions to the same level as California (region reviewed in depth), fix the lagging and loading times the app currently faces, and bring in more content creators and users. Overall, YUGENCREATIONS is currently plagued by minor inconveniences that don’t seem like a big deal but can turn into major issues down the line.

Final verdict: YUGENCREATIONS is in its infancy with strong promise. Once app developers fix some of the issue the app has the potential to become a five star app but for the moment I will give it two.