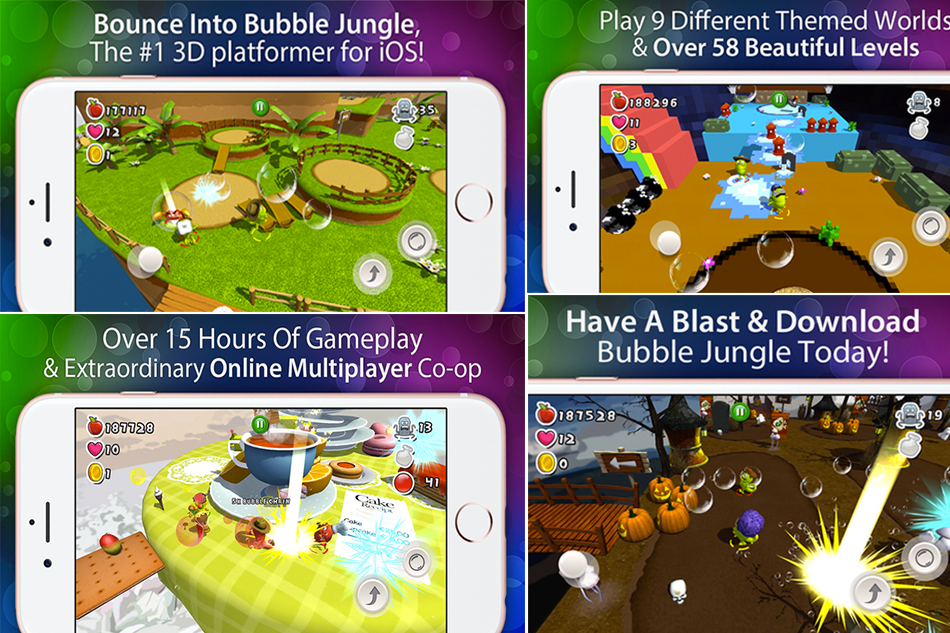 Eating your way through the jungle, whilst fighting off bad guys, with the sound of munching throughout the whole of the journey, that is Bubble Jungle Pro.

A perfect game for kids who like little animals, happy music and the idea of munching yourself through an adventure. The game is most definitely also appropriate for adults. It’s simple, but the simplicity is what makes it so attractive.

The essence of the game is this:

you’re a chameleon named Chuck. You eat your way through 9 differently themed worlds and over 58 levels. There are enemies who will get in your way to the next level, and in order to defeat them more quickly, you collect candies, lollipops and coins. The defeating of those enemies is done by blowing bubbles towards them to capture them. All this is done to master yourself to defeat the grand end boss, or big enemy, if you will, of the game.

The game is not just great to play on your own, but quadruple as fun when you play it with three of your friends (four people in total).
Another great thing about Bubble Jungle is the fact that the player is able to customize his or her character, which makes the experience more your own and therefore more enjoyable.

When it comes to children playing the game, the colorful surroundings, as well as brightly colored Chuck himself, will attract kids over and over again. The game has the tension to pull the player in, and is very addictive, which means that hours of fun, either on end or spread out, are guaranteed.

Pros:
– Bright, fun colors
– Many levels to work your way through
– It’s not too difficult
– Child friendly
– Multiplayer options
– Characters can be customized
– Good build-up towards the end level
Cons:
– The sounds can get on your nerves after a while
– It takes a while to get into the right mode of navigation
– The menu doesn’t look quite as beautiful as the game itself

The Bubble Jungle Pro game for iPhone and iPad is incredibly fun to play for any person of any age, though children may be getting more pleasure out of it. It’s a very happy game, which makes it addictive and will keep calling the player back for more. It has more than enough levels, which all look gorgeous and are increasingly difficult, though never too hard. It’s an ideal game for when you have got a few hours to spare, or are looking for something to do the next time you’re waiting on the bus or train. Bubble Jungle is guaranteed to fight of any kind of boredom for a good while. The fact that the whole game prepares the player for the epic fight with the final boss is exactly as such a game should be, and makes it all the more exciting to play. It is fun to be Chuck for a couple of hours, and there is hardly anything more humanly exciting than the thought of eating your way through tropical lands.