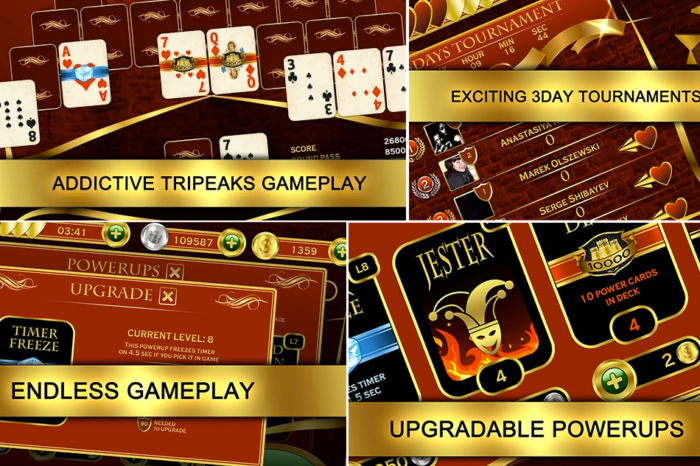 When we first found this app on Google’s Play store we were a little concerned that it might expose our Facebook account to online hackers. When you install the app you will notice that it’s marked as “Verified by Play Protect” which means Google reviewed the security aspects of the product before it was released on the Google Play Store and that it monitors all your apps on an ongoing basis for any security breaches.  So that should reassure you that Google are taking your security seriously.

The app is a little under 21MB which is quite reasonable for a multi-level game with all the graphics and sound. You will be notified that the app contains in-app purchases which puts many users off but we found we could happily play the game without making any payments.

Do ensure you know the rules of TriPeaks Pyramid solitaire before you start to use the app because they are significantly different to the traditional solitaire game you learnt as a child.

When you start the app for the first time you will be prompted to create a Gamer ID if you don’t already have one and your high scores will be available for other gamers to see, but you can disable this feature as part of the sign up process. The sign up process does warn you that your Gamer ID will be shared with the developer of the app but we think this is quite reasonable.

Ok you are now ready to play Solitaire by pressing the green “START GAME” button. Rules of the game will appear and it explains that the faster you play the more points you will score.

After the first game, in which we scored a very poor 4000 points, we were prompted to try an advanced version of the game with more than 150 levels. We declined the offer and went on to play our second game.

You will see a countdown timer in the top left hand corner counting down from 120 seconds to zero and we found we had gone through the pack long before it reached zero on our first play of the game. When it does reach zero the game will end and the second time around we had almost doubled our score to 7994 points.

We reached 40701 points in our third game and were starting to really enjoy the game. The developer of the app describes it as an addictive game and we wouldn’t argue with that.

Pros of the app:

· Free and very few prompts to download the paid version

· Many levels / rounds to work through

Cons of the app:

· A bit slow to load but we are using old Samsung S3.

· Not been updated for over a year but the developer does have newer versions that were updated within the last few weeks.

We do all our app testing on an old Samsung S3 because we know if an app works well on this device it is sure to work well on a newer handsets and the Towers TriPeaks Classic Pyramid Solitaire ran smoothly without any problems. It appears that the concerns some users have regarding their Facebook account are unfounded. We will be keeping the app on our phone and think it’s certainly one that many people will enjoy using.