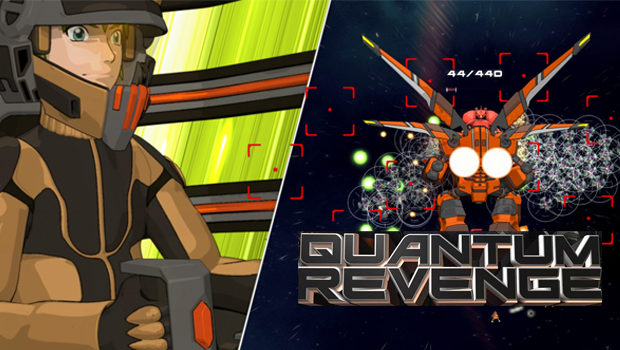 Quantum revenge is an upcoming action packed game coming for iOS devices in March 2017. The game is an entry into the dual-stick shooter genre. In these types of games, input is simple and involves mainly two virtual sticks. One to control the movement of your player and the other to control the direction in which you’re aiming. This game has a unique anime-inspired art style to differentiate it from other similar games in the genre.

It’s look is based on mechs usually seen in Japanese anime series. The game puts you in control of a robot-like machine, somewhat like those seen in Transformers. The game uses a blend of 2D and 3D animations and level designing to engross you in the world it creates. It conveys its universe in high-quality HD graphics that are sure to push your device’s capabilities to its limits.

The story takes place in the future where humans have branched out of Earth and started colonizing the solar system. You play as humanity’s last hope, their ultimate defense against an alien invasion. Your mission is to stop enemies using the tools at your disposal. The game uses high-quality, cell-shaded animation cut-scenes to convey its interesting story.

The graphics engine is optimized for OpenGL ES 3.2 and features high-resolution textures. It’s part of the reason why the game’s download and install size is expected to be a little larger than others. The animations of the game feature advanced physics and bone deformation. These make Quantum Revenge more interactive and engrossing to play. The 2D sections of the game are professionally animated and bring the game to life. There’s also advanced features and settings on in the 3D parts of the experience. For example, there’s a particle system to render explosions and smoke without any dip in frame rate.

While the touch controls are easy to manipulate and won’t deter your gaming experience, the game also supports Bluetooth controllers. Using one could make you better at the game as you’ll have an easier time aiming. The game also has support for Game Center so you can share high scores with your friends and update your score on Facebook.
The game gives players the choice of choosing between six different armor types for their mech. Each armor has its own unique design and powerful upgrades. The power-ups can also be upgraded in intensity to be more effective in wiping out waves of alien invaders. The game also has several aesthetic options to choose from that players can buy to customize how their mechs look. These visual upgrades add another interesting dimension to the game by allowing you to express yourself visually with different looking mech parts.

All in all, Quantum Revenge looks quite promising and should provide an enjoyable experience to its players. The game’s easy controls and fun power-ups will make it accessible to even novice players and young kids. People who enjoy watching anime featuring mechs will particularly enjoy it as it will give them the opportunity to be the ones behind wheels of the advanced machines.