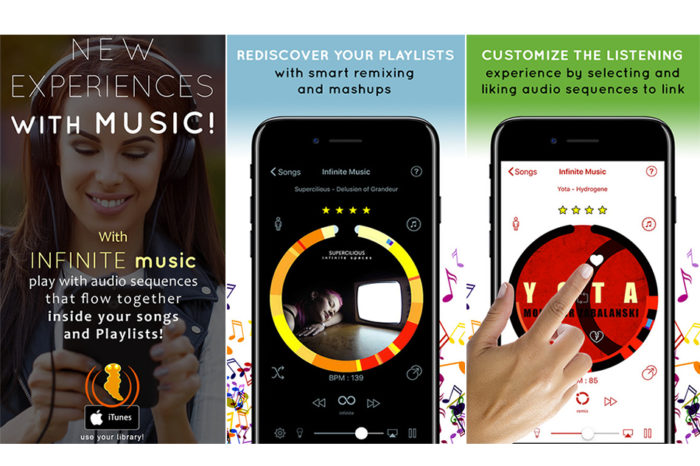 What would happen if we delete music from our lives? Can you imagine this world without music? I think you can’t even dream about a situation like this. It would be a flower without its fragrance, a body without a soul or a playground without players. It can’t exist and won’t we stable for long. Its existence will be over. When there’s no music, there will be no peace. So, it’s better to have music in our lives. Don’t worry, I’m not deleting the music, in fact, I’m just telling it’s importance!

Today, as the scenario has changed, the new generation listens to remixes and mashups, which are are composed of the old songs and new songs creating a twist in that. People enjoy listening and dancing to that music in a function or a party. They just create an environment and make someone’s day. Today, we’re doing a similar thing with the help of ‘Infinite Music’.

Infinite Music has been developed by L&J. It is compatible with iPhone, iPad and iPod touch and it requires iOS 9.3 or any later version of the Operating System.

The Infinite Music app create remixes and mashups from the songs of your iTunes Library and it becomes interactive than before. You can create automatic mashups from a playlist, album, etc. and enjoy them anytime. Infinite music provides the best experience with Pop, Dance, Electro, Techno and RnB. You can now play your Playlists as a single song by jumping to a following song at the points in which they are dynamically similar. You can rate the music which you like and which you don’t like and create remixes accordingly.

Infinite Music plays all music without DRM protection store in your library, so share your best grubs. If you want to compose a mashup, select a Playlist, a genre, an album and select the song you want to play first. Select delay time before skipping to the next song because it will find the links to a following as the current song is playing. Then activate the song transition option allowing Infinite Music to find and save the best jumps between songs.

With Infinite Music you can split the song into many small audio sequences that are dynamically linked together to create new songs that can play endlessly. They can be surprising, unbelievable and even funny. Infinite music can detect what you are doing right now by using accelerometer data analysis, it plays songs according to that whether you’re walking, taking rest, on a vehicle, running, etc. If you have Philips Hue lamps, then Infinite Music synchronizes to the rhythm of your music.

The Infinite music supports multitasking, background audio, play mp3 attachments, iCloud drive or Dropbox audio files. There are many improvements in this latest version of Infinite Music. So download it and listen to your favorite music!

Be open, creative and passionate with Infinite Music now! The app is available for free in the iTunes store. Check it out!

Pros: brilliant graphics; create mashups & remixes; rediscovers your iTunes Library; track your every step and plays music according to it; free.

Cons: this app is not compatible with streaming platforms(YouTube, Spotify, etc.)