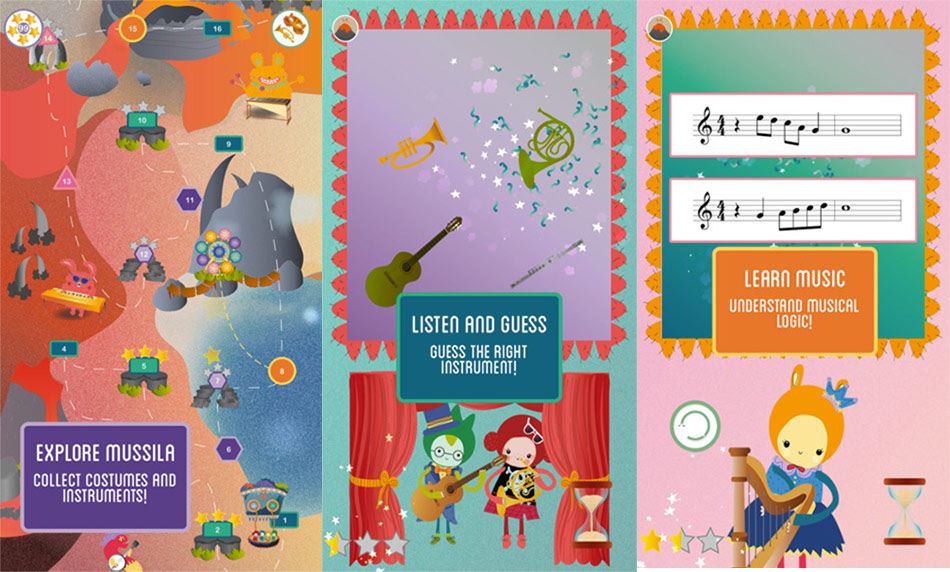 Mussila is a very addictive game developed for the kids and kids only. If you ever wanted your kids to learn music, this game will setup a basic platform for that. You don’t need to be a musical expert to understand this game. The game is self-explanatory and guides you through each level and is very user friendly.Mussila is a game filled with end to end fun to learn music in an easy way. There may be many musical applications and games in the app store but Mussila has a unique way to attract kids towards music.

If you ever wondered how to play the game, just follow the trail of paw which will guide you through the game. The game gives you various opportunities to learn the very basics about music by allowing you to identify musical instruments by listening to the music. You can play along with the musical band of creative characters and be a part of the band. It allows to learn music easily by making you listen and copy the music by playing it on piano. The game allows you to guess the correct rhythm and melodies to get rewarded with stars, musical instruments and costumes for the band and allows you to beautify the band with the attractive costumes.

The game is designed for iPhone and iPad but it will work with iPod touch as well. The game is compatible for almost all the iDevices with iOS 8.0 and later.

Cons: The game occupies 312 MB which is a little high for a game with just 60 levels. The game has only 60 levels of very few differentiations in each level, developers should consider more innovative story line. Developer should think about expanding the game support to Android devices as well. Currently it is available only for iDevices only.

Even though there not much differences in the game levels, the game is not boring but is very addictive to compete against the time and earn stars to prove your kid’s musical knowledge.