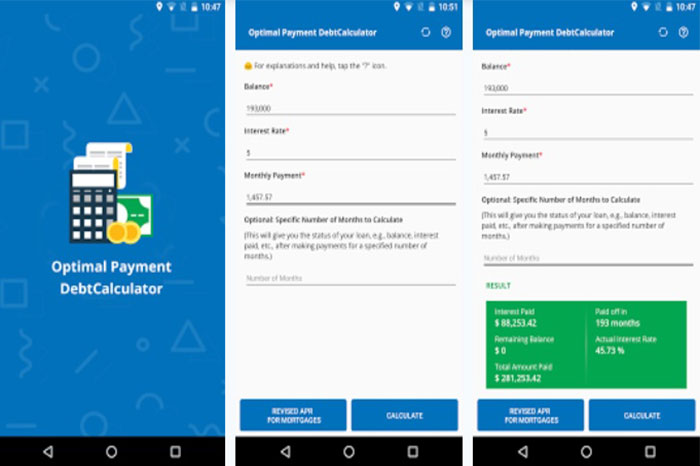 We all understand that the first major step toward reaching financial freedom is to regain control of your spending and pay off debt. However, it is often difficult to do than it sounds. More gracefully modern technology is making it a lot simpler to set and reach your financial goals also staying on top of your debt. Optimal Payment Debt Calculator Android developed by Elias Lorette is one of the best applications introduced for benefit of users.

Though there are some of the best debt repayment tools and apps to assist you pay down debt quickly and stay motivated to reach the long-term goal of building wealth. Optimal Payment Debt Calculator widely helps you in large perspective. The key purpose of the calculator is to carefully determine which numerous payment amounts would allow you to reduce your interest charges as much as possible by changing the amount of the monthly payment or adding payments to the principal.

By effectively using this app, the users could adjust their monthly payment to achieve an optimal result. For example, if users like to pay no more than $300 dollars interest on a 6000 dollar loan (5%), they could plug in the figures and calculate the amount you require to pay every month, until you reach a 5% result. It is illustrated that $457 for 14 months, given a loan rate of 8%.

The users could also put in several payment amounts, until they search a payment that yields an interest rate that seems reasonable to you. By this app you could view how much money that can be saved if you pay down the balance immediately with. In apt words, you would get a 72% return on your $3000.

Moreover by using the debt calculator, the users could actually determine that if they double the payment you are making, and direct that ½ of the payment goes directly to the principal, that users could save thousands of dollars, substantially lowering your actual interest rate. As you can see, there are a lot of different methods, strategies, and apps that can be used to track your debts. But hopefully this app would give you a good starting point, so you can begin your journey toward debt freedom.

Needless to say, I think that acumen developer did an awesome job with Optimal Payment Debt Calculator in terms of app concept, which I think are worth the price of buying. I think it qualitative and beneficial enough with important goals that it actually keeps you coming back for more.