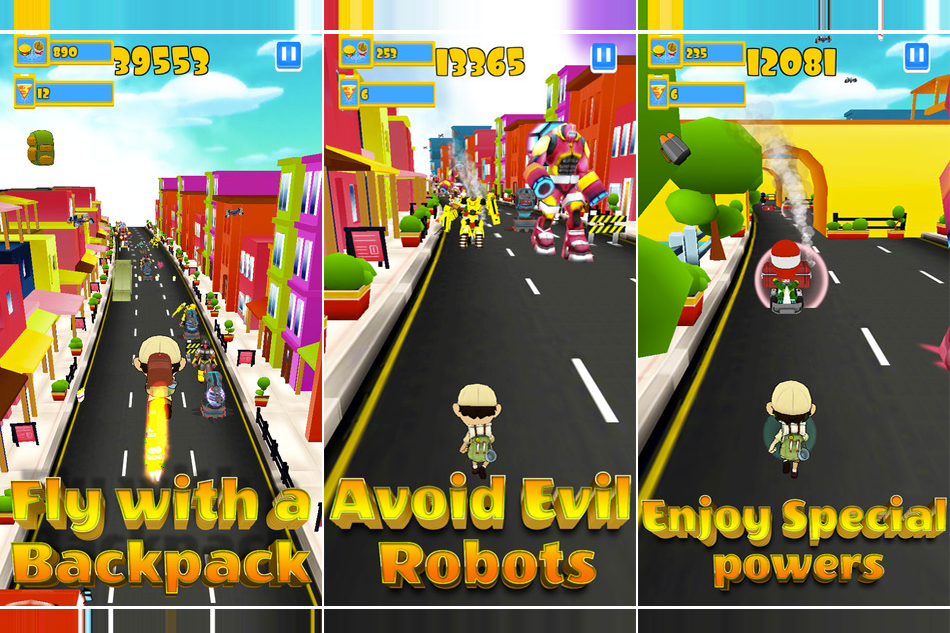 The ardent game players have a reason to smile since the introduction of the amazing Robot Clash Run. This game which has been recently updated on 27th July, 2016 has been developed by Abhishek Gupta. This amazing app game comes with a unique experience where the players are expected to defend the earth by attacking the intruders who appear to be fierce drones and robots. This amazing app is quite addictive due to the high quality animations and other features that have been integrated. The interesting part is the ability of players to play at a supersonic speed, soar high up the sky using the jetpacks and launch attack on the drones. Without forgetting, there are special powers that the user can launch and destroy robots and drones in an instant.

The first thing that the user discovers from this great app is its action-packed nature. The entire gameplay is fast-paced where the player needs to be absolutely keen when running and launching different attacks. Besides, the game is quite intuitive in nature making it exceptionally user-friendly. When it comes to playing the game, the presence of amazing controls makes the user launch attacks on the enemies in a flicker of a second. It is for the player to apply different unique skills and techniques in order to come out as a conqueror.

Check below for the amazing features displayed by the Clash Clan Run app game:

During the gameplay, the user will discover how sneaky these spy robots are! They can actually hide themselves in unnoticed area only to abruptly launch unexpected attacks. Thus, the player needs to be vigilant in order quickly discover them and fire a shot before they attack.

Actually, these missiles are known to totally destroy the robots that may be hiding on the ground. This should be a momentous attack where the player should leave the robots writhing due to the excruciating pain experienced. It is time to prove who the real inhabitants of the world are!

This is one of the fantastic games that the user can have a chance of playing it anytime at any location. This is because it does not necessarily need internet connection in order to play. It is indeed absolutely convenient to try it out with much ease.

Many more worlds to defend

This is the recent update that has been integrated in this app. So far, two other worlds have been introduced into this game; they include the Military Base and the Asian Town. This clearly implies that the user has more worlds to defend from the drones and robots while engaging with this app.

Generally, the vivid design that has been applied on this exceptional app clearly gives the player an amazing gaming experience. The incorporation of the pixel perfect animation displays a high quality formation that completely introduces the player to a fantasy world.

Clash Clan Run app game has proven to work well with high quality devices such as iPhone, iPod Touch and iPad. When it comes to the operating system, the most effective one is iOS 8.0 or any new version available.

Here are the Pros and Cons that are evident in Clash Clan Run app game:

· Quite engaging and intuitive

· Absolutely convenient; no need for internet

· Slowdown in performance due to bugs

Clash Clan Run app game has proven to be quite engaging, fun, intuitive and exceptional when it comes to performance. This amazing gaming app is meant to give the gamers an unstoppable experience that will leave them completely fascination. It is time to download this app from the App Store today. Don’t miss that gaming moment!