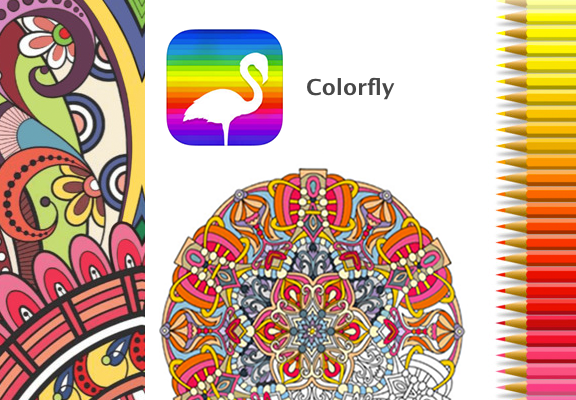 People are always looking for the next greatest app to download to their cell phones or to their personal digital devices to use in their downtime. There are a multitude on the market today, which might make it hard to choose just one. However, fortunately this review of The Colorfly iPhone App might help to make the decision far easier than otherwise.

The Colorfly iPhone Application is a relatively new update that is considered to be an adult coloring book that makes for great fun. It is rated as the number one coloring app with upwards of four million users that have downloaded it and use it on a regular basis with great success.

And what is more is that it is not only the greatest coloring book for adult users, but it is now available also on the iPhone, iPad and iPod as well. The best talking point is being noted as the fact that the Colorfly iPhone App is being offered for no charge at this time, which people love about it.

The pros about The Colorfly iPhone App is that is ultimately offers detailed and good – looking illustrations alongside multi – color palettes for even greater appeal. The app makes it easy to begin to take an image or picture that you already have and then recolor it with great ease. And there has been more than one performance improvement that has been made as a result of the upgrade.

The colors seem to be amplified, meaning they have been improved upon their clarity and contrast amidst colors which adds to the overall appeal to the app. Also, the black outlines appear to be clarified as well and makes for a crisper picture or image. It has also been well received that the app can be used and even transferred to more than digital device for continued use which seems to be a true upgrade to the app.

The price point of it being free has kept people coming back for more and more. They appreciate that they can get something of good value without spending a fortune of their hard earned money on it. That is also a true bonus feature.

There does seem to be somewhat of a delay when the user tries to load the app before it is ready to be used. That has been a concern for some users in that they would prefer it to load faster and be readily available to be used when they are ready to use it instead.

The Colorfly iPhone app has clearly had mixed reviews from the people who have downloaded it for their own personal use. But with that being said, the primary response has been positive and most people deem the app as being worthy of a second look before moving on. And when it is offered for free and does not cost any money to download it, it has changed people’s minds that it has the true potential to continue to be developed into a superior app in the future.