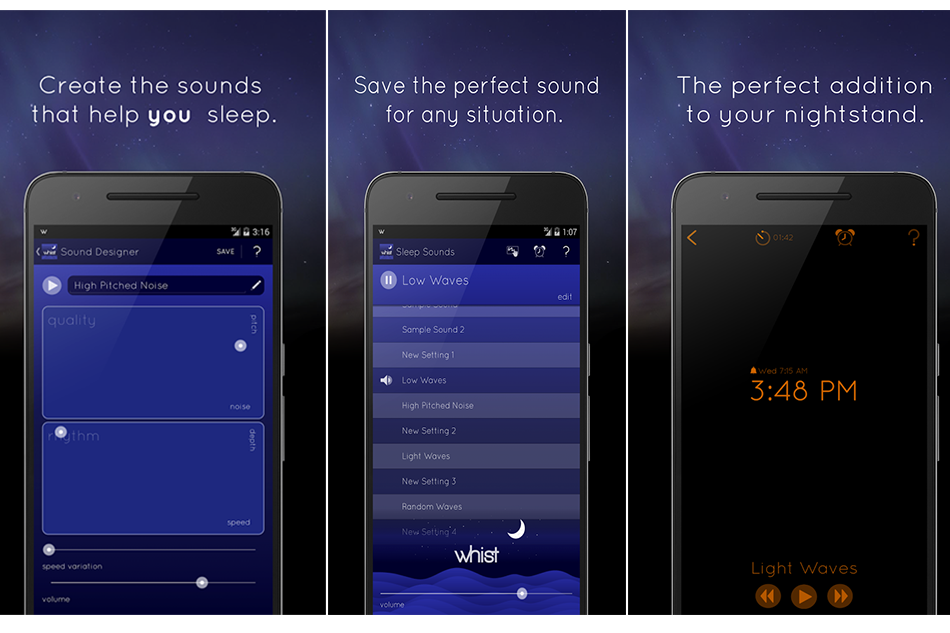 With today’s ever increasing connectivity, there is positively an app for everything. There are a ton of apps on the mobile market today designed to optimize almost every part of our waking lives, so why should sleeping be any different? Whist, a customizable sleep sound designer, is a product best used for those who sleep better with a bit of noise. The app comes with two pre-loaded sample sounds, but also has options for rearranging settings to create own personal sleep soundtrack of choice. The part that I really enjoyed personally was the ability to adjust things like pitch, rhythm and frequency, so that there are no unexpected interruptions once I get used to my sleep soundtrack of choice. Furthermore, this product does come with a standard alarm setting, which is also customizable along with the volume, intervals between alarm setting- for those of us that like to snooze. It also has a handy sleep timer, which I found incredibly useful for napping before night shift.

There were a couple things worth note, which I would not necessarily count as cons but are definitely useful for general knowledge. Firstly, there is a free version and one which must be purchased through an app store such as Googleplay. The free version has most of the same goodies, except for one thing: you must upgrade to save your own settings. In my opinion, given the fact that the app retails around $2.81, I sprung for the upgrade which is slightly more cost effective at $1.99. Secondly, while most of the settings are adjustable, there is no option for recording other noises, and this is simply due to the fact that all of the sounds provided are reminiscent of the wind and water.

Overall, I find it easy to navigate and pleasant app to use, but it could benefit from a kind of sleep tracking software like Runtastic’s “Sleep Better” app. Combined with an app of that nature, Whist could certainly be used to its full potential. This is a great idea, however, as is-especially as the free version goes- it feels a bit sparse for a stand alone application. It has all of these neat features, but where an app like “Sleep Better” allows to optimize rest by tracking certain factors which contribute to the sleep efficacy, as well as factors which account for poor sleeping habits. Whist feels like the feature they are missing, and it is mostly because of the fact that it offers a lot of things which are already found factory installed on most android phones. For now, it simply feels incomplete in wake of stiff competition, and while I like it, I’m left wishing it was a small part of something else.

A large part of this is due to the fact that there seems to be an over abundance of ‘wellness’ apps targeted at balancing our busy daily lives. Many of them serve the same purpose with varying differences, however, with many applications like Whist, it is merely up to the user to find what works best for them. For now, this is as good as it gets.